Who was Paul Harris?

Paul Harris was the founder of Rotary.  But first he was just one man with a dream of self-improvement.  That humble dream soon grew into local fellowship before expanding into community service on an issue that was very important at the time in downtown Chicago, the construction of public toilets.  Like other visionaries whose dreams have exceeded their expectations, Paul Harris is one such man. Once the dream was put into motion, it grew and grew until it began to swallow the whole world in the form of today's million-member international institution including Rotarians from 33,000 clubs in over 200 countries, including you! 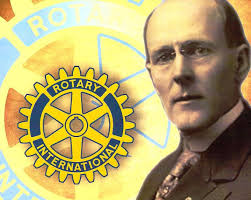 The Anaheim Hills Rotary Club meets most Thursday evenings from 6:45 to 8:00 PM,
with the third Thursday of each month being an online Zoom meeting at the same time.
Please feel welcome to join us and learn more about our club and Rotary.
​If you would like to attend on a Thursday, please RSVP by the previous Thursday evening to:
[email protected]